As of yesterday afternoon, we finally have Internet access at the new house.

Many thanks to the Comcast tech that did the install. He did a very neat install exactly the way I asked him to.

Now I can listen to ad-free music 🎼 when I’m working 🔨 out there.

A huge concern when we were looking at this house was its utter lack of Internet connectivity. There is no cable to the house and the telephone company can’t provide DSL because the wires to the house are (probably) 45 years old.

Yikes! No Internet is a deal killer for us. We can’t work without high-speed Internet and we stream the vast majority of what we watch and listen to. Now what? Let’s look into getting cable installed.

Comcast, the local cable monopoly, does have cable on the poles on the street. In fact, there is a pole right next to the driveway. Great. Let’s talk to Comcast and see what it will take to get cable installed up to the house. $38k+ 😱 You have got to be kidding me!

Well, after numerous conversations with a couple of Comcast reps, we got the Comcast charge down to under $5k providing we install the conduit from the street up to the house. Okay. Let’s see what that’s going to take. To make a long story short, a lot more than we wanted to spend but a lot less than Comcast wanted if they put the conduit in. Since we plan on staying in this house permanently, amortizing the cost out over the long term, as it were, it’s worth it.

(Laura adds: We were initially going to hire a trenching outfit to trench the entire route, but things… happened. In the end, I’m glad they did, as if the original guy had done the trenching, we would have had to buy lengths of conduit at the store, and glue them together, then have the trencher return to fill in the trench. Time consuming. In the winter. In Washington. Wet. Cold. Sounds awful, right? We thought so, too. Especially Dave, who’s the one who would have done all of the work. In the rain and cold. And it probably would have taken weeks to complete.)

The company we hired to install the conduit has some pretty awesome machines.

The first bores underground, is steerable (up, down, left, right), and pulls the conduit back through the hole when it is retracted. 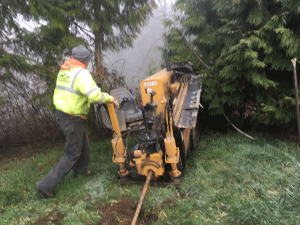 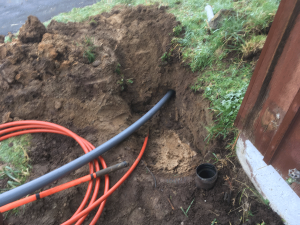 Look at that. Two conduits right under the driveway with no ditch or damage to the driveway. 🙂

The other is called a plow. It has a spool of conduit and a huge plow blade-shaped head through which the conduit is fed. The head is lowered into the ground and vibrates very fast. The result is that a narrow, two-foot deep cut is made in the ground, the conduit is placed within it, the ground falls back over the conduit, and then it’s all tamped back down. Minimal mess. Minimal damage to the landscape. Very cool. (Laura adds: And amazingly fast. All that, a quarter mile, took only 2.5 days!)

Comcast has installed their cable in the conduit and installed “pedestals” along the way for their equipment and possible future customers on the adjoining lots.They are supposed to connect to the main cable on the pole today (Friday, 1/17/2020) and test it all next Monday.

Assuming all is good, we’ll then schedule installation to the house. 👍🏻