We went from this:

Fresh out of the box, but still in the dining room. The big hole here is where one of the ovens will live.

Cupboards emerge from the boxes they’ve lived in for the past year.

This one will be next to the cook top. There is a matching mate for the other side. Oh, and yes, you counted right: five drawers!

Some assembly is required.

Oven, oven, then the pantry is on the far right. The large oven is a “regular” oven. The small oven is a steam oven. I am so going to have to try my hand at making sour dough bread!

The basic layout, not including the peninsula where the cook top will live. The gap to the left is where the dishwasher will go. The uppers over on the right are the only uppers in the entire kitchen. So far. Once we get around to creating the breakfast nook there will be a couple small uppers there, too, but that’s a future project. When we designed the kitchen we were going to enclose the top of the uppers, so that neither Ansel nor dust could land up there, but now that it’s in? Oh my. No. I don’t think so. It’s so pretty the way it is!

Here’s the peninsula that will be the home of our lovely cook top. Does it seem like there are a lot of drawers there? (Maniacal laugh deleted.) It’s because there are a lot of drawers! A total of ten drawers, five to each side, and the four more in the middle. Those four big drawers will be home to most of our pots and pans. I don’t know if the biggest stock pot will fit, but I think that most everything else will. Holy cow. And what about those ten smaller drawers? Spices in one (or more), overflow utensils in another, hot pads, I’m thinking maybe towels, and we might just end up with multiple lid drawers, so that we can sort them. 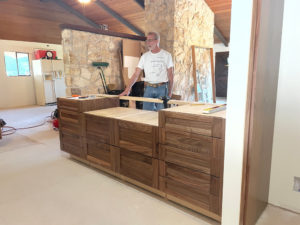 The back of this peninsula will eventually match the rest, but that bit cannot be installed until after we have the floors in. Ditto with all the toe kicks. Toe kicks throughout will be installed later. 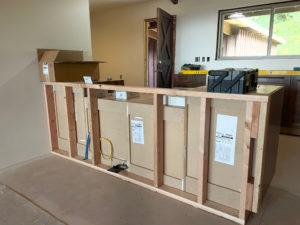 Our kitchen designer likes to mix things up, so we have coordinating knobs and pulls. The cupboards have knobs, and the drawers have pulls. What’s extra cool as there are big versions of these pulls that will go on the refrigerator and dishwasher doors. I didn’t know they could do that! 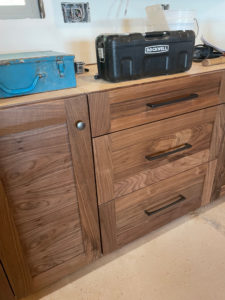 What is this, you ask? This is a part of a super high tech method of measuring for kitchen counters. He takes this back to the shop, finagles the file a bit, loads the counter blanks onto the cutting widget, then goes off to hit some balls at his local driving range. Measurements happened on Friday afternoon.

If you recall, when we bought our house the door leading from the master bedroom to the master bath was installed too close to the counter to open fully. Yes, for more than 40 years people had to deal with banging the door against the counter. On advise from our kitchen designer, we removed the door, cut down the one wall to pony height, and framed in for a pocket door. This added about 3 square feet and a lot of elbow room to the bathroom. But it also gave us a weird gap between the shower and the pocket door. So we filled it. We filled it with a cabinet that matches those in the kitchen. Wondering what that weird hole is in the bottom? That’s a laundry shoot! Clothes will drop nicely down into a cupboard in the laundry room. No more running downstairs with a full laundry basket (too bad there’s not a lift to take the closet back up!). There’s currently a stack of extra shelves in the upper part of the cupboard. One of them will move down to above the shoot, and the other will move up. Oh yeah. There’s a pullout in there. And the knobs match those in the kitchen. So much fun.

In case you were wondering

The wood is walnut, sealed, but not stained. The walnut makes my heart go pitty-pat.

Here I’m in what will be our library, and I’m looking at the closet under the stairs, a.k.a. the network closet. I just love how all those angles turned out! Oh, plus you can see the stairs going up. That doorway used to have a door in it. So much better without.

The inside of the entire house has been painted! Well, except for the bathrooms, which are my job. Last week we went from bare walls with tape and mud on them to textured, painted walls. Well. There’s another except thing…

Before painting began, I was told to get ten gallons of paint to start with. Didn’t seem like much, but you have to start somewhere, right? Holy cow! Have you painted anything recently? That ten gallons of paint cost $500! Talk about sticker shock! Can’t move forward without paint, though, so here we go. Our painter ran out of that without too much trouble, so I was sent over to the paint store to get five more gallons. Oh ha ha ha. Yeah. Last Friday was fun. Our local store was out of paint. Have you ever heard of such a thing? A paint store without their most common paint base? Anyway, the closest store with the paint in stock is in Vancouver, so off I went. The store is half an hour away from home, so I enjoyed a nice little drive, picked up the paint, and dropped it off at our house. That was early afternoon. At about 4 pm Dave texted me. We were out of paint. Again? Already? Well, I wasn’t driving to Vancouver again on Friday, not at that hour (the longer I live up here the less patience I have for traffic). We fetched the paint on Saturday, so all was well. The last of the painting was done on Monday morning, fairly early.

And here we are! The rest of Monday we worked at cleaning up the debris left from hanging rock, mudding it, etc. We concentrated our initial efforts in the kitchen, to be ready for the cabinet installer. Dave also re-staged all the boxes with the cabinets in them, so that they’re easy to get to.

In case you’re wondering, I bought a total of 20 gallons of paint for the whole house (excluding bathrooms). Most of our ceilings are cedar, so no paint there. Our painter used an airless sprayer, which covers well with less paint, and is super fast.

When will our cabinets be installed, you ask? That’s a very good question. We were going to try to aim for Thursday or Friday this week. Then a tree fell on the installer’s house! Luckily, everyone is apparently just fine, but instead of installing cabinets, the guy is trying to get an electrician out to his house, as the tree took out the power line. Obviously no idea how long he’s going to be sidetracked getting things fixed at home, or stable anyway. Keep your fingers crossed. With any luck at all the next time I post will be soon, and it’ll include our beautiful cabinets installed in the kitchen.

Okay. It’s not sudden. It’s far from sudden. But it feels sudden, because the difference is so amazing. When we bought this house every single wall was paneled except for the bathrooms, and the inside of one closet. In between we had walls that we could look through for the longest time (standing in the dining room we could look through the guest room, through the master bedroom, and out the window on the north side of the house), now the walls are covered again but with sheetrock instead of paneling, and the outside walls actually have new insulation instead of 47-year-old stuff filled with dirt, dead bugs and mouse carcasses (ew). When I was at our house yesterday I walked in the door, and my brain exploded. It is looking SO good! We haven’t even painted the walls yet, and suddenly they’re fabulous.

I tried to find “before” pictures that were taken when I standing in about the same spot as I was yesterday. There’s still plenty of construction mess, but that part doesn’t count. Look, look, look, look! OMG. 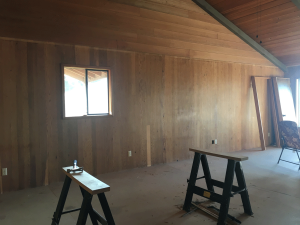 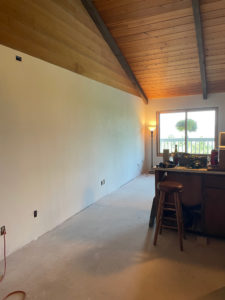 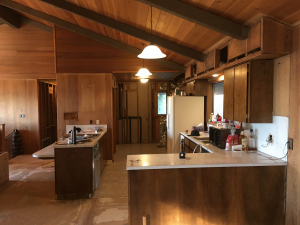 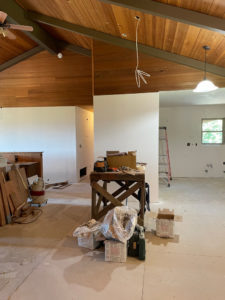 Normally, I’m a “it’s wood, leave it there” sort of a person. But the 47 year old paneling didn’t look as good up close as it does in these photos. If time alone hadn’t been bad enough, the house was a rental for a decade or two, and there were a myriad of holes dotting the walls, many small, but some quite large (Dave enjoyed getting rid of the 70s era intercom system, but that left gaping maws in the paneling all over the house). Plus, see how the paneling that’s above the eight-foot mark stands out now? Before it was lost. Now it’s a feature. Be still my heart.