Dave and I spent about five hours over at our house (that sounds so strange!) yesterday. Mostly we ripped out the carpeting in the TV room and the guest room downstairs. We (meaning Dave) also got started ripping out the carpet in his office, but let’s back up a tiny bit. We also narrowly avoided (especially Dave) getting stung by a bunch of startled wasps.

When we closed escrow we only received two keys, the only two keys that the seller had, both unlocking all exterior doors around the house. The mailbox key? The garage door remotes? Gone. Kept by the last tenants, apparently. Arg. To help keep all and sundry out of our new house, we bought a couple new deadbolts. Dave installed the second one when we got there yesterday. To keep myself busy while he was swapping out the deadbolt on the kitchen door, I took a screwdriver and removed switch plate covers around the living room and dining room, avoiding anything that didn’t use a standard screwdriver. When he was done with the lock, Dave attacked one of the places where cable comes into the house in the living room. Then, suddenly, he was backing up fast, batting at his hair, and making strange noises. You’d be making strange noises, and flailing around, too, if you were suddenly attacked by a bunch of wasps.

Here he’s calmed down a bit, but mostly because he had a can of “instant death” in hand to help fight off the swarm. 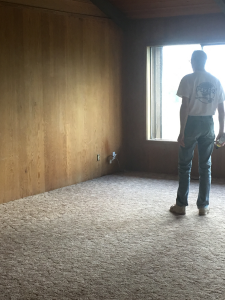 We opened up what windows we could (the front windows are glued shut), the door, anything to try to encourage the mean-spirited wee beasties to beat a hasty retreat. (A couple hours later, when all but one were dead or departed, I used the included fireplace tools to sweep up the carcasses, and dump them outside. I also pushed the cover back over the hole the wasps emerged from, to encourage them to stay put.) Later on we found where they’re entering the house. We’ll deal with that another day.

We’d thought to maybe start pulling up the rugs upstairs first off, but decided to begin downstairs. Just in case.

We started with the old mottled brown carpet in the TV room. It matches, sort of, the carpet on the stairs and upper hallway. Really terrifying stuff. We started pulling it up, and were surprised by what we found. No tack strips. No padding layer. Nope. Here we had a thin layer of padding stuff that was stuck to the bottom of the carpet… and to the classic brown linoleum floor below. 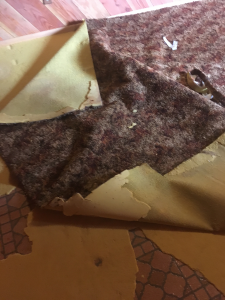 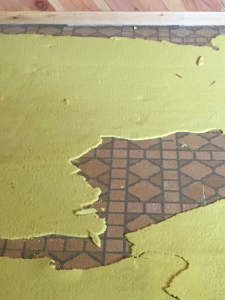 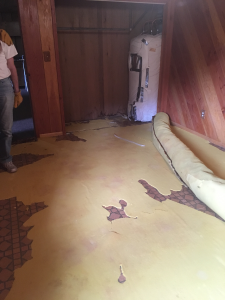 (P.S. Everyone wants a water heater in their TV room closet, right?)

Well, that was fun. Yes, we left a bunch of the pad on the floor for later. We moved on to the downstairs guest room. 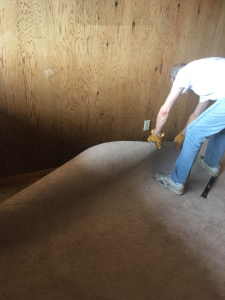 This is what we were expecting. Tack strip. Pad. Yeah, that’s the ticket. 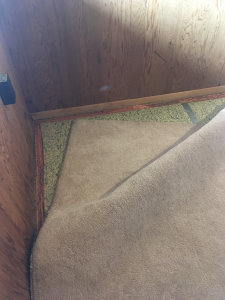 Wait a second, though. Yes, that’s right. They installed the built-in bookcase over the carpet. Oy. 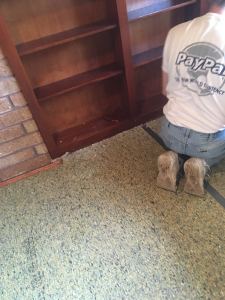 What’s underneath? More brown linoleum, like in the TV room. 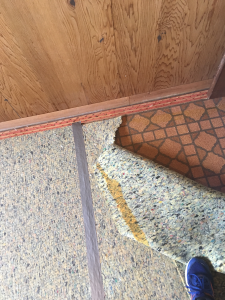 Next surprise: they glued the tack strip to the old linoleum floor. 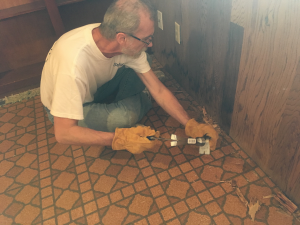 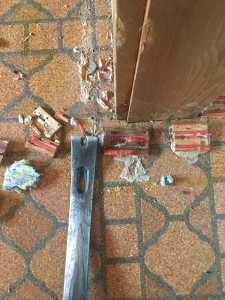 What we both found interesting is that this room looks bigger without the light colored carpet. Must be the shine on the linoleum. 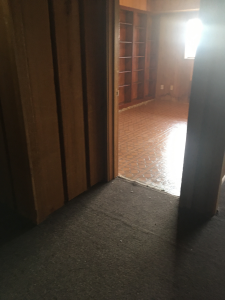 Moving on to Dave’s office we (well, Dave) pulls off the baseboards in preparation.

These walls are horrible. They’ve been a source of frustration for people for quite a while. So far, in pulling out the baseboards and carpeting in Dave’s office we’ve gotten rich, found one red die, and a little plastic toy thing. I wonder what else we’ll find. 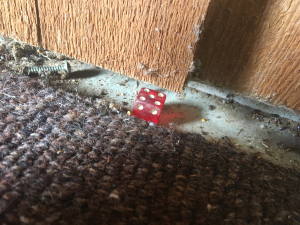 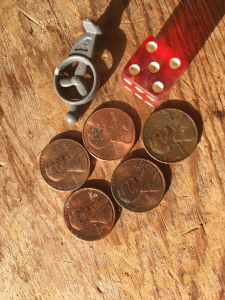 In this room, the thin dark brown carpeting is stuck so well to the linoleum that it’s easier to pull up the linoleum than to pull the carpet off of it. So that’s what’s happening here. Strip by painful strip. These things weigh a ton. Dave’s currently wishing he was about 20 years younger. Maybe more. Ouch. 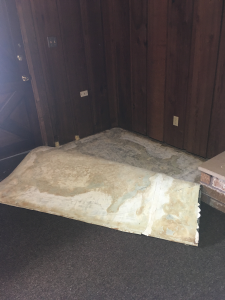 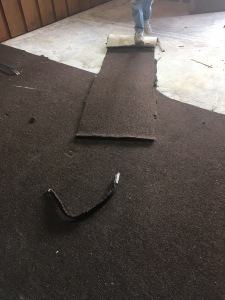 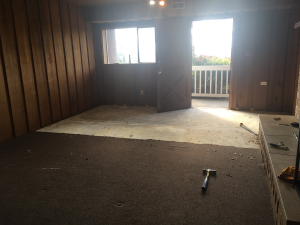 You know what, though? The room already looks tons bigger. Looking forward to getting the rough-cut paneling off the walls in here, too, but that will have to wait until another day. 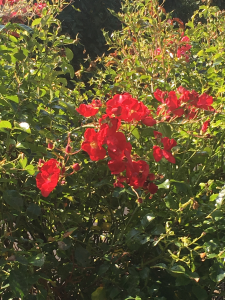 This is officially my very first post on the subject. We bought a house!!!! On ten acres. With lots of trees, and views, and old carpeting. The house has awesome bones, but hasn’t ever been updated, and so comes equipped with an oven that no longer works, and miles of 1974 carpeting. Ew. LOL We’re going to share our journey of making this house our very own here in this blog.